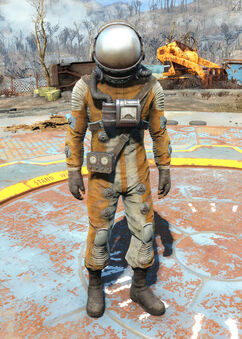 The suit provides 1,000 Radiation Resistance and an additional 98% radiation reduction, resulting in it providing more Radiation Resistance than a full suit of power armor. While wearing the suit, the Sole Survivor will be nearly immune to all external radiation damage, including gamma guns. However, it takes up every armor slot and provides no protection from ballistic or energy damage.

The damaged suit has metal strips patching up the suit's helmet.

The color and design of the hazmat suit closely resembles the spacesuits used by the Soviet Union during the Cold War.

Damaged hazmat suit on a male