Hazmat disposal site L5 is a system of caves storing radioactive waste that connect L'Enfant Plaza to the Mall. Entrance may be gained through the L'Enfant Plaza Metro tunnels. A hole in the tracks leads you to the cave network below the subway tunnels. Another entrance is located at the southwest corner of The Mall, near the Lincoln Memorial.

Near the L'Enfant Plaza entrance is a rigged baby carriage along the wall, and bed located in the corner by the collapsed hallway. The disposal site is home to one or two super mutants (near the L'Enfant Plaza exit), and a number of feral ghouls, ranging from basic ferals to glowing ones. At higher levels, with the Broken Steel add-on there will be several feral ghoul reavers, usually one in the main cavern and one in each of the 3 tunnels. 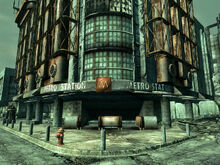 Metro entrance
Add an image to this gallery
Retrieved from "https://fallout.fandom.com/wiki/Hazmat_disposal_site_L5?oldid=3085112"
Community content is available under CC-BY-SA unless otherwise noted.