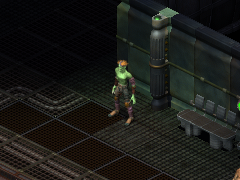 “Blessed Savior of Plutonius's irradiated flock! My name is Hazmat and I bring you the decaying salutation of our Bishop, Defcon the Second, son of T-minus. I journeyed here to deliver the nuclear scripture defining the magical properties of the Holy Warhead. Only by understanding the earthly workings of our God can you properly detonate the spiritual energy contained within.”

Hazmat Hazzard is one of the ghoul acolytes from Gravestone in 2197.

Hazmat Hazzard managed to survive the attack of super mutants on their city and came to the bunker to give some books to the Brotherhood scribes.

She only appears with Defcon being happy about the Warrior's actions (5 or less ghoul casualties during the Kansas City mission). Once she has appeared, she will disappear after the player leaves the bunker.

Even though Hazmat Hazzard is classified as a female, she sounds like a man.

Due to an error in one of the triggers for Kansas City mission, Hazmat Hazzard will never appear in the game.