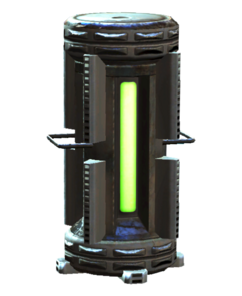 Hazardous Material is a miscellaneous quest in Fallout 4.

Fred Allen is a chem dealer who works at the Hotel Rexford. The Sole Survivor can begin this quest by telling Fred that they are "looking for work," after which he will tell them about the HalluciGen, Inc. building and how there must be exciting materials inside which he could make chems with. He offers the Sole Survivor 200 caps to bring him something from the building. The player character can persuade him to raise this reward, up to a maximum of 400 caps (by intimidating him).

The HalluciGen Inc. building will be occupied by Gunners which Fred will inform the Sole Survivor of during the job pitch. However, there has been a chemical leak and the building is filled with green HalluciGen gas which has caused all the Gunners to turn on one another. They will do a good job of killing each other, leaving the player character with fewer people to kill themselves.

In the basement is an Expert locked lab access terminal. It can either be hacked or the HalluciGen master password can be obtained from the Novice locked mainframe access terminal in the adjoining room and used to unlock it. There is a corridor with a decontamination arch containing toxic gas. The player character can either run through the gas (taking some damage), pick the Expert lock on the door in the adjacent corridor to bypass the gas, or vent the toxic gas using the terminal in the adjacent corridor. Either method leads to a laboratory with a Tesla arc trap and a Gunner commander. The HalluciGen gas container is on top of a cabinet in this room.

The Gunner commander holds the HalluciGen key which can be looted from their corpse. This key unlocks the back entrance to the building which leads back outside to the Esplanade. Return to Fred Allen and give him the gas canister to complete the quest and receive the agreed-upon reward.

After retrieving the gas canister, the quest marker may be fixed on the player character in the Pip-Boy map and invisible on the compass, and Fred will not have the relevant dialogue choice in order to complete the quest. This can be circumvented by using the console command setstage FFGoodneighbor03 100. The player character will still receive the correct amount of XP and caps after doing so.[verified]

Retrieved from "https://fallout.fandom.com/wiki/Hazardous_Material?oldid=3416958"
Community content is available under CC-BY-SA unless otherwise noted.
... more about "Hazardous Material"
RDF feed
Has platform
PC +  and Playstation 4 +