Haymarket Mall is a location in the Financial District of Boston in 2287.

Haymarket Mall served as an indoor marketplace and associated offices before the Great War. After the war, the building fell into disrepair. The mall is currently occupied by raiders and the building's automated defenses.

Most rooms in this structure are inaccessible, with only the first, second, and eighth floors accessible. The first and second floors are connected by stairwells, with an elevator on the second floor leading to more derelict rooms on the eighth floor. The first floor has access to Congress Street garage through an Expert-locked door to the south, while the eighth floor has access to the garden terrace on the exterior roof through an unlocked door to the northwest.

An Advanced-locked security terminal connected to two Protectron pods and the downstairs turrets is in the eastern section of the first floor. The Protectrons and turrets on the eighth floor are controlled by an unlocked office terminal next to the two Protectron pods in the southern room on that floor. The mall features three workstations, including a cooking station just outside the main entrance, and an armor workbench and a weapons workbench on the second floor.

Haymarket Mall appears only in Fallout 4.

The frame for the elevator that ascends to the eighth floor from the second floor doesn't move. The buttons, hatch, and doors move with the Sole Survivor, but the frame remains on the lower level. However, the Sole Survivor can still go up or down using the elevator. This will occur when loading an automatic save created when entering the mall through the Congress Street garage door. [verified] 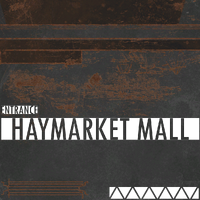