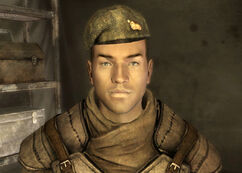 NCR tent, Primm
Camp Forlorn Hope (only after dealing with the Powder Gangers at the NCRCF) 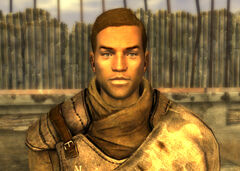 Hayes without his beret

“We know Primm is a great strategic point, and we aren't blind to the needs of the town, but we're barely holding our own against the Powder Gangers.”

Lieutenant Hayes is a lieutenant of the New California Republic Army, 5th Battalion, 1st Company. In 2281, he has been charged with the containment of the Powder Gangers, who have taken control of the NCR Correctional Facility (NCRCF).

He is located in Primm, on the opposite side of the bridge from the fast travel point. He can always be found in his tent. After retaking the NCRCF from the Powder Gangers, he will relocate to Camp Forlorn Hope, where he will stand by the campfire opposite the supply shack.

Retrieved from "https://fallout.fandom.com/wiki/Hayes?oldid=3270237"
Community content is available under CC-BY-SA unless otherwise noted.