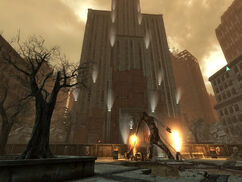 “Yeah, because you would have just whined about it. If you aren't getting your hands dirty, you aren't making a difference. Welcome to the world. What's important is that the kid is here now, and we can move on to the last part of the plan. That's just a simple matter of letting the Trogs overrun Haven and take care of the bosses for us.”— Wernher

Before the Great War, Haven was one of the many skyscrapers in downtown Pittsburgh. Unlike the buildings surrounding it, Haven appears to have survived the devastation with minimal damage.

At some point following the Scourge by the Brotherhood of Steel in 2254/2255, Haven was chosen by Ashur as his headquarters after founding the Pitt. It is located in the Pitt Uptown area of the city.

Haven Entrance is the ground floor of the building, guarded by three Pitt raiders. The section has three levels with the higher ones being reachable via staircases to the east and the west of the building. A lift opposite the main entrance connects to Haven itself. The higher levels mostly contain beds for the guards and partial galleries overlooking the main hall on the ground floor.

This section of the building is home to Ashur and his family. A corridor with a small room to the left leads to the central room which Ashur uses for meetings and audiences, secured by two ceiling-mounted automated turrets. From there, corridors lead to Ashur's living quarters on one side and Sandra's laboratory on the other. Ashur's room contains a safe with several holotapes addressed to his daughter Marie (taking them will act as stealing, thus Karma will be impacted) and a terminal through which the turrets in the main room can be controlled. Sandra's laboratory contains various scientific equipment, Marie's cradle, and a terminal which holds information about her research.

Haven appears only in the Fallout 3 add-on The Pitt.

Body inside of the wicker man
Add a photo to this gallery
Retrieved from "https://fallout.fandom.com/wiki/Haven?oldid=3347688"
Community content is available under CC-BY-SA unless otherwise noted.