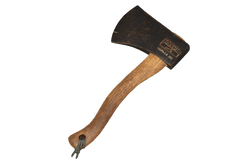 The hatchet is a weapon in Fallout 76.

Manufactured by the company Hacho, manufactured in America with the serial number HGP5-0.6 360. The hatchet is a one handed axe originally meant for splitting kindling and firewood, featuring a straight blade and an ergonomic wooden handle.

Add a photo to this gallery
Retrieved from "https://fallout.fandom.com/wiki/Hatchet_(Fallout_76)?oldid=3475746"
Community content is available under CC-BY-SA unless otherwise noted.