Hat of the People 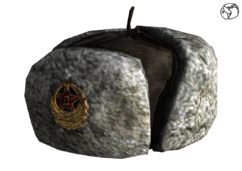 The Hat of the People is a unique Chinese commando hat in the Fallout 3 add-on The Pitt.

The Hat of the People provides a bonus of +5 to Small Guns, unlike the regular version, which provides +1 to Perception. It also has 5 more HP and is worth 23 caps more than its non-unique counterpart.

This hat can be found in a room within an Average locked floor safe on the second floor of the abandoned apartments. Once upstairs, enter the first apartment on the right, unlock the Easy locked door to the right of bathroom, and the safe can be found under the nightstand.

While wearing the Hat of the People, the Pip-Boy lists its +5 Small Guns effect as coming from a "combat jumpsuit." [verified] 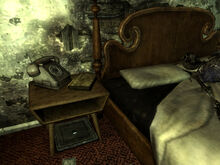 Safe with the hat
Add a photo to this gallery
Retrieved from "https://fallout.fandom.com/wiki/Hat_of_the_People?oldid=3399389"
Community content is available under CC-BY-SA unless otherwise noted.
... more about "Hat of the People"
RDF feed
Has platform
PC +, Playstation 3 +  and Xbox 360 +