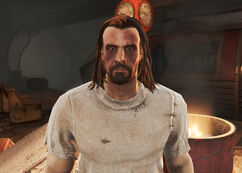 Harvey is a wasteland survivor in the Nuka-World transit center in 2287.

Harvey was a trader who came to Nuka-World prior to the raider invasion that led to the three raider gangs controlling the park, killing or enslaving most of the inhabitants. His family was killed, and he was placed in a shock collar amongst many other captive traders, whom he now considers his family.

When first encountered in the transit center, Harvey appears to be injured and tells people that he escaped the raider-infested but wealthy Nuka-World, and that his wife and son are still trapped there. If the player attempts to help or question Harvey too much, he will admit that he is pretending to be injured, and being forced by the raiders to lure anyone he can into the Nuka-Express which leads to the Gauntlet, an inescapable torture maze resulting in certain death.

Harvey appears only in the Fallout 4 add-on Nuka-World.

Harvey at the Nuka-World transit center
Add an image to this gallery
Retrieved from "https://fallout.fandom.com/wiki/Harvey?oldid=2990312"
Community content is available under CC-BY-SA unless otherwise noted.