Hart's body, shredded to pieces by a deathclaw 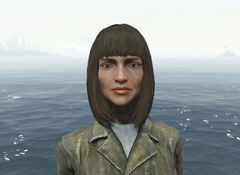 Private Hart is a deceased Gunner soldier in the Commonwealth in 2287.

Private Hart's remains are found on the ground near the Museum of Witchcraft. She has a holotape on her that starts the quest The Devil's Due. She was most likely killed by the deathclaw now wandering around inside the museum.

Hart appears only in Fallout 4.

Retrieved from "https://fallout.fandom.com/wiki/Hart?oldid=3289382"
Community content is available under CC-BY-SA unless otherwise noted.