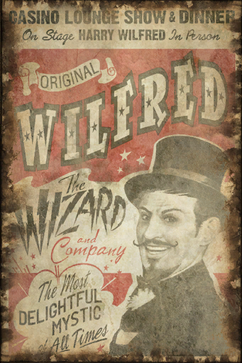 Harry Wilfred, known by his stage name Wilfred the Wizard, was a pre-War magician.

Wilfred was part of the top tier line up of Tampico theater acts, advertised on promotional material for the grand opening of the Sierra Madre Casino & Resort.[1] Additional advertisements can be seen throughout New Vegas on posters, advertising him as "the most delightful mystic of all times." His fate is unknown.

Harry Wilfred is mentioned only in Fallout: New Vegas and its add-on Dead Money.

Retrieved from "https://fallout.fandom.com/wiki/Harry_Wilfred?oldid=3206225"
Community content is available under CC-BY-SA unless otherwise noted.