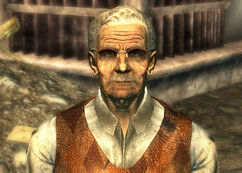 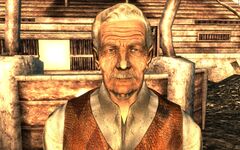 Harris without his glasses

“Better an orphan than a cannibal I guess?”

Harris Smith (colloquially Old Man Harris) is a resident of Andale in 2277.

The Smiths and Wilsons would prefer that the Lone Wanderer take no notice of this elderly kook, who lives in his rundown shack. He is obviously a lunatic, and reeks of cheap alcohol.[2]

Harris was formerly married to his late wife Gladys, carrying on the local tradition of cannibalism in Andale alongside her. They posed as friendly neighbors to lure unsuspecting wastelanders into a trap, where they were murdered and eaten by the local families. For Harris, however, he stopped once his wife passed away and now tries to prevent more travelers from becoming victims, asking them to leave and save themselves, stating things in town are not what they seem to be.

In the case that the two families living in Andale are found out to be dining on human flesh and subsequently killed at the hands of the Lone Wanderer, Harris will take in the two children orphaned as a result of their actions, Jenny and Junior. He will raise them himself with the prospect that they will grow up to help rebuild the town to be a proper community after all the evil that took place there.[3]

Harris Smith appears only in Fallout 3.

Retrieved from "https://fallout.fandom.com/wiki/Harris_Smith?oldid=3331825"
Community content is available under CC-BY-SA unless otherwise noted.