Harpers Ferry is a town in the Mire region of Appalachia.

In the decades leading to the Great War, Harpers Ferry became a focal point of the Free States movement. Skeptical of the U.S. government vault program, the group used the town as a staging area and supply point for the construction of personal bunkers across the Mire.[1][2] The movement's conspiracy theories and ideals unnerved patriotic visitors, disrupting the small tourism-dependent town's economy.[3]

As the Sino-American War escalated in 2077, minor conflicts between the Free States, loyalists, and police began to grow into open violence, catching the eye of the government.[4][5] Soon, local Harpers Ferry business owners were visited by government agents and coerced into providing the names and addresses of suspected Free States members.[6] By May, the clinic began to refuse services to those known to be involved with the group.[7] By June, the military staged a propaganda campaign in the town and began to seize the property of Free States members, citing seditious activity.[8]

After the Great War, Harpers Ferry was largely abandoned as emergency services and local survivors struggled to cope with the influx of refugees after their homes were annihilated by the nuclear exchange. In 2078, Vault 94 opened and sent an ambassador to the town to invite survivors back to the vault.[9] By November, the mayor of Harpers Ferry, Miranda Vox, agreed to sent a group of survivors with an ambassador to investigate the vault's claims.[10][11] Certain that the dwellers' hospitality was a trap, the Harpers Ferry group massacred the vault's leaders and attacked its G.E.C.K. unit, triggering a massive nuclear explosion and further mutating the Mire.[12][13][14]

After the Free States members emerged from their bunkers in 2079,[15] the mayor contacted the leader of the movement for assistance.[16][17] Despite previous conflicts, the movement agreed to provide aid. The rebuilding effort began, turning the town into a major fortress and trading post near the heart of the Mire. By 2084, the town was a prosperous outpost, providing support and food to those in need.

Already struggling with an ongoing mass paranoia about an outbreak of an unknown "disease" causing people to change into ghouls,[18] Harpers Ferry was hit hard by a new outbreak in 2086. The Scorched Plague reached the town, causing some Free States members to abandon the town and return to the safety of their bunkers, abandoning their seven year project to help the people of Harpers Ferry.[19] After scorchbeasts breached the automated anti-air perimeter and began to spread into adjacent regions, Harpers Ferry was rapidly destroyed, forcing the remaining members back into their bunkers as well. The leader of the movement, Raleigh Clay, issued a general order to abandon all recovery efforts of the town.[20]

Harpers Ferry is a large town consisting of densely-packed residential buildings with a number of overlooks created through the damaged structures. The residences are marked with ascending or descending address numbers, depending on the street or avenue. The hill surrounding the local church-turned-barracks is fortified with large defensive barriers and guarded by automated turrets. The barricades extend to enclose the street northeast of the hill, though they have fewer defenses. A large armory lies to the southeast of the fortified hill.

At the northern edge of town, a Free States trading post lies at the end of Shenandoah Street behind a cluster of buildings. It once contained vendor bot Wallace (who has since moved to the Berkeley Springs Station) and has a nearby chemistry station to the north.

The outer areas of Harpers Ferry are bounded by Route 65 to the west and two converging railways to the north- and southeast. Train cars line the town's eastern perimeter, with several having been derailed onto the adjacent road. Manhole covers leading to the Burrows can be found near the town's western perimeter.

Harpers Ferry sits at the confluence of two rivers, where the Shenandoah River flows into the larger Potomac River. The Potomac River, located northeast of the town, can be crossed by using the railroad bridge leading into a collapsed tunnel. At the mouth of the tunnel is a wooden walkway leading under the bridge and to a path between the cliff and the water which leads to the ransacked bunker.

Harpers Ferry appears only in Fallout 76.

The Main Street of Harpers Ferry, with numerous ruined buildings and instruments 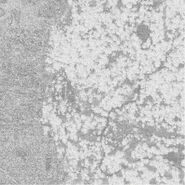