Harper's shack is a building in the Mojave Wasteland in 2281. It is located to the north of Dead Wind Cavern at the end of Primm Pass.

The two-room shack is located along a south-facing rock face. It has a campfire outside, along with some prickly pear cacti. Inside, the player character will find a workbench and reloading bench. Several crafting tools are inside the shack along with a few ammunition boxes and some random weapons and loot. Harper's shack also includes several storage containers and a usable bed.

Members of the Vipers gang frequently patrol to the northeast. There may be multiple deathclaws in the area. 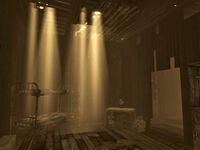 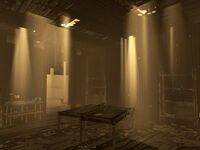