Helps Nobody
“I may look like a corpse, but I'm partial to living!”

Harland is a ghoul working with the Bright Brotherhood at the REPCONN test site in 2281.

Harland was separated from the rest of the Bright Brotherhood while fleeing from nightkin in the basement. He and another member of the Bright Brotherhood were running away, but his friend ran off to a deeper part of the basement. When the Courier finds Harland, he is set up in a defensive position on the second floor of the room and has already killed several nightkin. If asked how he survived for so long by himself, he claims to have lived off radroach meat, used the condensation off the pipes for water, and "does his business" in the far corner.

Harland is a hardy survivalist seen by the fact that he knows how to make a good kill zone, has good marksmanship with his hunting rifle, knows how to set up bear traps and a shotgun trap, and knows how to lay mines in the ground without setting them off.

It is evident that he cares much for his friend, shown through the fact that he wouldn't leave until her whereabouts were confirmed. 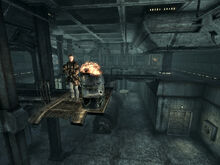