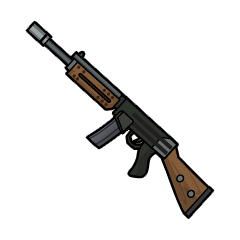 “Perfect for a merc who wants one gun for any situation, forever.”— In-game description

The hardened assault rifle is a weapon that appears in Fallout Shelter.

Manufactured by civilian defense contractor Stent Security Solutions, the R Series of combat assault rifles was used reliably following the discontinuation of the M series in the early 21st century.[1] Chambered for 5.56mm ammunition, the R91 full-auto urban assault rifle is common throughout the Capital Wasteland.[1]

The weapon was used by troops on the Anchorage front[2] and served as the National Guard's standard issue rifle during urban pacification operations, who were fully deployed in Washington D.C. at the time of the Great War.[1] As a result, despite the war having taken place two centuries ago, the R91 can be found commonly throughout the ruins of D.C., currently utilized by slavers and raiders as well as sold by legitimate traders and arms dealers.[1] Like any firearm, the R91's effectiveness and accuracy will suffer without regular maintenance.[1]

The hardened assault rifle is an improved fully-automatic magazine loading rifle featured in Fallout Shelter. Dealing a minimum of 8 damage per attack, it has the third highest damage output for a rifle in the game.

A high Agility statistic is needed to effectively create the hardened assault rifle.