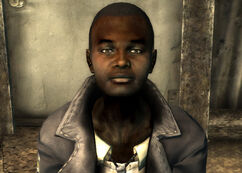 “You're my hero, mister. I want to be just like you when I grow up.”— Requires good Karma and/or disarming the bomb in Megaton)

Harden Simms is an inhabitant of Megaton in 2277.

Harden was born in 2267. He is Lucas Simms's 10-year-old son. His father has instructed him not to talk to strangers in Megaton, and he reluctantly obeys. He goes to sleep early and rises early, which gives him enough time to meet up with Maggie and play.[1]

By 2297, Harden was the sheriff of Megaton. When drunk, he would often speak about his father's death, and blame it on the Lone Wanderer. It is unknown if Lucas Simms died because of Burke or died at some unknown point between 2277 and 2297.[2]

He's a good friend of Maggie and is usually seen near her in the mid-morning to late afternoon. It is implied by his father, Lucas Simms that Harden also polishes Deputy Steel on a regular basis, but this is idle chatter as the child is not scripted to enter the Megaton armory.

Harden Simms appears only in Fallout 3.

His dad named him after the Old West outlaw John Wesley Hardin.[3]

Retrieved from "https://fallout.fandom.com/wiki/Harden_Simms?oldid=3267668"
Community content is available under CC-BY-SA unless otherwise noted.