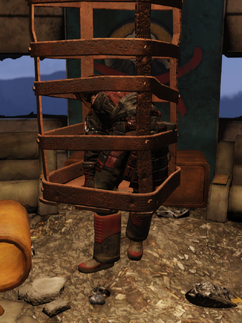 Hank Madigan was a member of the Responders' Fire Breathers division and a former member of the Brotherhood of Steel before 2102.

Prior to the War, Hank Madigan was a firefighter and a combat veteran, having served with the United States Marine Corps, more specifically, Force Reconnaissance. After the Great War, Madigan initially enrolled with Taggerdy's Thunder and became a member of the Appalachian Brotherhood of Steel. He remained with the organization for years, until 2086 and Maxson's decision to focus the Brotherhood on preserving human progress, with helping people a secondary priority. Madigan quit in disgust and offered his services to the Responders. Although Melody Larkin and Maria Chavez were impressed and anxious to enlist a veteran soldier, Madigan's desertion drove a wedge between the Brotherhood and the Responders, further entrenching Taggerdy's disdain for civilians.[1]

Together with Melody, Madigan formed the Fire Breathers, an elite fighting unit of the Responders dedicated to fighting in the Ash Heap and preventing the Scorched from taking over. As a member of the Fire Breathers, Madigan continued to run independent operations over the mountains, which involved making a run at the AMS corporate headquarters in Watoga. He was responsible for the discovery that depleted ultracite laced munitions could inflict heavy damage against the Scorched, after he recovered research from Atomic Mining Services.[2] During this mission to AMS, Madigan also found leads for the Excavator power armor developed by the Garrahan Mining Company.[3][4]

After the fall of the Brotherhood in 2095, Madigan ventured beyond the mountains into the Mire and made contact with the Free States, after being caught at Raleigh Clay's bunker attempting to "figure out" one of the scorchbeast lures which had been set up there. When he learned that the device was one that could lure and disorient a scorchbeast long enough for a team of militants to eliminate it, he asked for proof, but Clay told him that they were not willing to just share their discoveries with an ex-Brotherhood member and that he had some serious trust to earn.[5] He was also told that the device would already be completed if not for the raiders of the Savage Divide. Determined to earn the trust of Clay and to save Appalachia from the Scorched Plague, Madigan attempted to broker peace between the Responders and the raiders at Top of the World in order to install the scorchbeast lure but was instead tortured and killed. His corpse can be found in a steel cage near Rose. Nevertheless, Madigan's attempts had not been in vain, as some years after his death, in 2102, the Vault Dwellers from Vault 76 completed his mission to install the scorchbeast lures and killed the scorchbeast queen.

The name internally used by the game for this corpse incorrectly duplicates the name of Darion Jones.

Hank Madigan appears only in Fallout 76.

Retrieved from "https://fallout.fandom.com/wiki/Hank_Madigan?oldid=3421849"
Community content is available under CC-BY-SA unless otherwise noted.