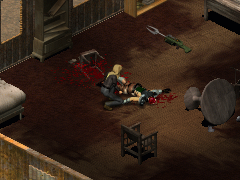 Hank, mourned by his wife

“You, you with your big guns and your armor! You're... you're too late. They killed my Hank! They shot him in the face and took his robot piece and mumbled something about it being the "tool of Satansoft!" Why would they do that? My Hank was a good man! *sob* Well, I followed them to their camp. It's to the northeast of town. You have to go there... go there and cut them down, like they cut down my poor Hank.”— Martha grieving with bitterness over her murdered husband

Hank Dilbert is one of the inhabitants of Junction City in 2197.

When a malfunctioning robot came to Junction City, Hank scavenged its parts and took it to his shack to the south of the main gates. Later, Reavers came and killed him, taking the parts and leaving his wife, Martha Dilbert, alive. He was a cheating family man according to Anna Guarana, the mayoral assistant.

Hank Dilbert's corpse is only found in Fallout Tactics.

Retrieved from "https://fallout.fandom.com/wiki/Hank_Dilbert?oldid=3360765"
Community content is available under CC-BY-SA unless otherwise noted.