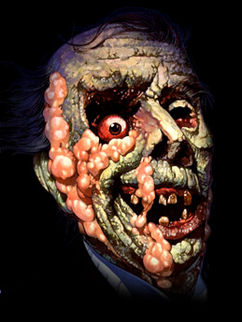 Hank is physically non-threatening and does not convey the same hostility towards smooth skin humans as his kin. He will treat any and all customers with equal pleasantries and try to give the best deal possible. He is very informative about the different weapons he sells, as well as any weapon that seems new to the wasteland. And, he has no problem explaining the best uses of any of the weapons he sells.

The Reservation Trading Post is known among the seedier crowd to be a great place to purchase weapons, particularly firearms and ammunition. While supplies are limited to metal and gunpowder resources available to the ghouls, the Reservation can still boast a superior cache of firearms to practically anywhere in the wastes.

Hank is also a quiet dissenter. He does not agree with Willem Clark’s plans and philosophies, but he is very reluctant to tell anyone. Evidently, the punishment for dissent is to strip the dissenter of all earthly possessions and cast them out into the wasteland. From there, the dissenter’s life can be measured in hours instead of years, due to the inherent dangers of the wasteland. This keeps Hank’s mouth shut about opposition, and he will openly praise Willem’s work.

Hank’s feelings of dissent are not that uncommon for newuns - a term used for ghouls who have been at the Reservation for less than fifty years. At first, the prospect of living in a well-protected facility with plenty of working power and fellow ghouls sounded like Shangri-La. However, when Hank heard the rumblings of Dr. Willem Clark's plans to do away with humans with dirty bombs, he had his doubts. The red flag really went up for Hank when he heard that human slaves were being experimented on to aid in the ghoul procreation process. He did not really have anything against owning slaves, he knew that it was a necessary evil in some parts of the wastes, but he was of the mind that slaves should be well taken care of to get the most use out of them. And torture certainly was not an option, let alone invasive experimentation. No, he did not approve of Willem’s plans, but Hank was far too scared to ever speak out against Willem.

Finally, Hank happens to have a bit of a crush on his smooth skin slave, Jillian McKinley. He acquired Jillian one day from Measles himself. Measles told Hank that this smooth skin slave was special and would serve better helping him with weapon and ammunition sales and acquisitions than shoveling coal in the smith. And Measles was correct. Jillian was almost as knowledgeable about firearms as Hank and proved an invaluable asset. This only fueled Hank’s longing for Jillian, but Hank also knew that Jillian could never fall for him. So Hank kept his crush to himself and treated Jillian with surprising respect, allowing her to work alongside him at all times, albeit through a radiation suit.[1]

A trustworthy player character can possibly get Hank to slip here and there, and reveal his true opinions, especially when it comes to Willem's plans of genocide and domination.[2]

Hank has not appeared nor is he mentioned in any published game. He was to appear only in Van Buren, the canceled Fallout 3 by Black Isle Studios. It is not certain if he will appear in any future Fallout game.

Retrieved from "https://fallout.fandom.com/wiki/Hank_(Van_Buren)?oldid=3123852"
Community content is available under CC-BY-SA unless otherwise noted.