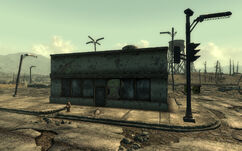 Hank's Electrical Supply is a fairly small building next to the Jury Street Metro station, occupied by raiders. There is only one interior section.

The building is an old abandoned shop. On top of the roof there are two raiders and Aqua Pura barrels (although these will only be present if Broken Steel is installed).

The inside contains two rooms, the larger of which (apparently the former shop area) is divided by a counter. A ladder on the back of the building provides access to the roof. Against the middle of the back wall is a workbench. The main feature of the smaller room is a safe with a terminal nearby which could be used to open it, were it not already unlocked. The area is home to three raiders.