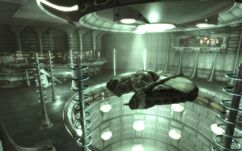 “Hold on there... don't take another step. No telling how far down that goes.”— Paulson, warning the Lone Wanderer about the hangar bay leading into space.

The hangar is a location on board Mothership Zeta.

The hangar is the part of the ship where smaller spacecraft enter and exit Mothership Zeta. Upon entering, you will notice a pylon energy field holding the remains of Recon craft Theta. Within the hangar is one of the generators that must be destroyed as part of the Among the Stars quest. If you requested his help, Paulson will follow you into this area. Once you get to the control center and activate a button, an alarm will go off alerting the aliens to your presence. Thus begins a battle using the gravity beams that hold up Recon craft Theta. The upper level of the hangar includes a console with five buttons; each button causes a pair of the beams to emit bursts of energy that send the aliens and their drones flying.

This hangar appears only in the Fallout 3 add-on Mothership Zeta.

In the generator room at the 'end' of the area there is an inactive teleporter, if you look through this teleporter, you may actually get a 'Search alien' prompt and be able to loot this seemingly nonexistent body. On some playthroughs, if you turn on your Pip-Boy light you will see gore of an alien body.[verified]

Retrieved from "https://fallout.fandom.com/wiki/Hangar?oldid=2905144"
Community content is available under CC-BY-SA unless otherwise noted.
... more about "Hangar"
RDF feed
Has platform
PC +  and Xbox 360 +