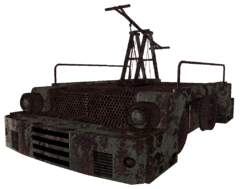 The handcar is a vehicle encountered when traveling to the Pitt and can also be found in the Mojave Wasteland.

An old railroad car powered manually by alternately pushing and pulling on the lever situated in the center. It's mostly used as a means of rail maintenance or as a mining car, due to the fact it could easily be used to carry supplies and workers, but it was also used for means of solo transportation in some cases, especially after the Great War, when large scale trains were destroyed or rendered inoperable.

A handcar can be found in the train tunnel, and can be used for the treacherous journey to and from the Pitt using the remnants of the extensive rail network stretching across most of the country especially the heavy industrial center of Pittsburgh which used railways to easily transport large amounts of ore and steel into and out of the area.

A handcar is located at the emergency service railyard, derailed next to the platform.

The handcar appears in the Fallout 3 add-on The Pitt, as well as in Fallout: New Vegas.

At the emergency service railyard
Add a photo to this gallery
Retrieved from "https://fallout.fandom.com/wiki/Handcar?oldid=3354415"
Community content is available under CC-BY-SA unless otherwise noted.