Hammer is a super mutant living in the West Everett Estates in 2287.

Hammer is the leader of the super mutants stationed at West Everett Estates. At some point he and his super mutants eliminated the raiders occupying the location and settled there.

His primary weapon is a missile launcher, starting from unmodified at lower levels and becoming progressively more modified at higher levels. He can be heard on Hammer's holotape giving a report to another super mutant leader, Fist.

Hammer appears only in Fallout 4. 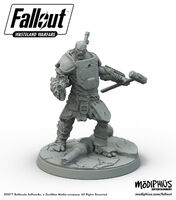