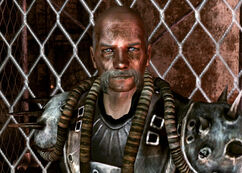 “No scabs near the gate. Back off.”

Hammer is a Pitt raider found in The Mill in the year 2277.

His nickname stems from his impressive skill in the arena with a blunt instrument. It could be imagined they still have not managed to scrape the bloodstains off the wall after that particularly gruesome display of close-quarters bludgeoning when he is met face to face.[1]

Hammer is in charge of guarding the gate that leads to The Pitt Uptown. He spends all of his time in front of the gate, and does little else. Hammer will voice his dislike for what he calls scabs getting too close to the gate, if the Lone Wanderer is near his post before they earn clearance to uptown.

Hammer appears only in the Fallout 3 add-on The Pitt.

Retrieved from "https://fallout.fandom.com/wiki/Hammer_(The_Pitt)?oldid=3259333"
Community content is available under CC-BY-SA unless otherwise noted.