Hamilton's hideaway is a small cave in the side of a cliff face in the Capital Wasteland in 2277.

According to Evan King, this is one of the three possible locations the Family live.[1]

Just north of Moonbeam outdoor cinema and southeast of the Meresti Metro Station, Hamilton's hideaway is a network of tunnels that sprout from one single tunnel. Multiple catwalks lead over rocks that lead into a hallway constructed of metal. The weapons cache for completing the unmarked quest, Caching in with Three Dog, is located in the northwest corner of the hideaway, through a hole in the left wall.

In the weapons cache

The gate key is obtained through dialogue from Three Dog.

Hamilton's hideaway appears only in Fallout 3. 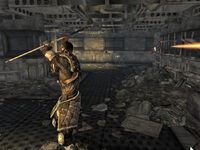 The weapons cache, Guns and Bullets on the footlocker to the right