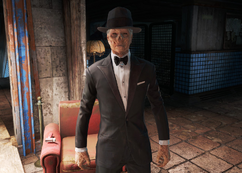 “Charlie serves the drinks. I deal with the drunks.”

Ham is a bouncer living in Goodneighbor in 2287.

Ham is the bouncer of the Third Rail. He is a stocky, no-nonsense ghoul in charge of security, meaning that anyone who causes trouble will have to deal with him. Although he is a consummate professional, Ham is also soft at heart, and is protective of Magnolia.[1][2]

Emogene Takes a Lover: Ham can be consulted on the whereabouts of Emogene Cabot, if the player character decides to speak to Magnolia at the Third Rail for information to find her.

Ham appears only in Fallout 4.

Retrieved from "https://fallout.fandom.com/wiki/Ham?oldid=3352415"
Community content is available under CC-BY-SA unless otherwise noted.