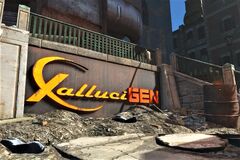 HalluciGen, Incorporated (also known as HalluciGen, Inc. or simply HalluciGen) was a pre-War company based in Boston that researched and developed "non-lethal" biochemical technology for use by the United States Armed Forces and police forces across the country for riot and crowd control, in the wake of automation and food riots and other forms of civil unrest.[2]

Releasing HalluciGen Gas in 2055,[3], HalluciGen aspired to be the world leader in cutting-edge nonlethal technology for police and military use.[2] However, despite hiring Implied Hypnotics' lead designer from the Mesmetron,[4] the company's success rate was low, with most of their products failing in testing. As such, the company was in dire financial straits by the third quarter of 2077, with a revenue of $1.1 billion dollars and a net operating loss of $1.8 billion dollars.[5] The former Mesmetron researcher failed to meet expectations and after a string of catastrophic tests, he was sacked on October 18, 2077.[4]

Like many other companies in America, HalluciGen used humans in their testing procedures, with frequent fatalities. In fact, the operating procedures stipulated sedating test subjects with spiked refreshments, with deliberately elaborate paperwork used to ensure absorption.[6] To make things even more atrocious, in case of chemical spills, executives were given priority, escorted by clerical staff, while the decision to evacuate test subjects was left entirely up to the science staff, who could decide to simply leave the subjects behind, sealed in the test chambers.[7]

HalluciGen was contracted by Vault-Tec to devise a psychoactive compound that could be used to manipulate the mood of the Vault dwellers.[8]

Frederick Rivers would also contact HalluciGen for use of their compounds in use of constructing gadgets, specifically the Phantom Device that would release HalluciGen gas upon activation and frenzy anyone enveloped in the cloud.[9]

Another riot control measure tested on October 18, 2077, the Dispersant test did not kill the subject. Instead, it triggered a panic and flight response when the subject saw his own child in the waiting room, leading to a police pursuit that apprehended him two days later. The subject had to be institutionalized. The failure of this test led to the Mesmetron researcher being fired and replaced as the project lead with a woman named Karyn.[10]

A riot control tool delivered by a Type-II fragmentation grenade.[11] The gas itself was kept inside of gas canisters. Originally created in 2055,[3] testing and refinement would continue until 2077. On October 18, 2077, the testing revealed that the gas was causing traumatic adrenal gland rupture in exposed subjects, resulting in hallucinations, erratic behavior, extreme aggression, and heart failure. Only one subject who survived the testing began to acclimate before he was beaten to death by four other frenzied subjects, and another died of heart failure. Effectively, no test subject survived exposure, making the gas a potent chemical weapon, but an ineffective riot control measure.[10] An attempt was made to spread their product testing outside of their own facility by sending canisters of their gas, along with a full order estimate, to Vivian Garrahan of the Garrahan Mining Company, in an attempt to assist with the mining protests in Appalachia.[12] However, Poseidon Energy bought their gas to end the Associated Miner's Union's protest at Poseidon Energy Plant WV-06. Rather than having the protesters going insane and turn on each other, this only caused the protesters to attack the National Guard that were defending the plant, further exposing them to the gas, and storming the plant where they killed everyone inside.[13][14][15]

Intended to be a portable field decontaminator, the Irradicator turned out to be a two-ton machine that managed to remove all biological and chemical contaminants, by applying 5,100 rads to the test subjects, resulting in near-instant body collapse. Reclassified as a lethal weapon, the Irradicator was potent enough to necessitate stripping the chamber and rebuilding it each time a test was performed.[16]

“InvisiWave is an exciting new advance in the field of stealth technology, capable of doing away with cumbersome personal generators forever.”— HalluciGen InvisiWave product demo

An invisibility device demonstrated to the United States Navy, Invisiwave was actually five mirrors, two hacked Stealth Boys, and a trap door. The test was a complete success, impressing a US admiral, leading to inquiries from the Navy about shipboard installations and demand for 200 units from the sales department.[17]

“Criminal scum? Don't get a gun. Try The Suppressor from HalluciGen-- a safe, reliable, and effective way to paralyze even armored targets.”— HalluciGen Suppressor product demo

Suppressor is a pacification gas created to paralyze even armored targets and provided target suppression through electrical discharges. Side effects included the partial and/or complete paralysis of the user, bystanders, and small/large animals. When subjects were tested upon they managed to incapacitate the subject permanently. The paralysis necessitated transfer to an external medical facility at Medford Memorial for monitoring and palliative treatment. The highest-paid researcher in the company, the Suppressor's project lead was also the lead engineer for Implied Hypnotics, Inc.'s Mesmetron weapon, and even reverse-engineered some of their own prototypes during the development of the Suppressor.[4]

HalluciGen is mentioned in Fallout 4 and Fallout 76. Their headquarters appear only in Fallout 4, while products of the company appear in both games.

The company's name is a pun on the word hallucinogenic.

Retrieved from "https://fallout.fandom.com/wiki/HalluciGen,_Inc._(company)?oldid=3418500"
Community content is available under CC-BY-SA unless otherwise noted.