Hallowed Moors Cemetery is a location in the Capital Wasteland north of Big Town, west-northwest of Meresti trainyard and northeast of Vault 106 across the river.

The cemetery is an easy walk away from either Hamilton's hideaway, Big Town, or the Meresti trainyard. There is a ruined cemetery beside the small decrepit chapel, which is now home to four super mutants with their gore bags and one human captive. Depending on your character's level, with Broken Steel installed, one of these super mutants may be a super mutant overlord. There is also a respawning deathclaw nearby. There are three makeshift beddings around a campfire in the building. 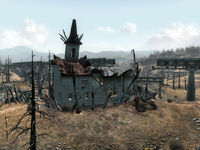 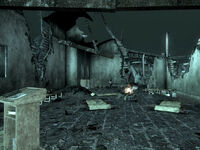 Inside of the chapel