Haley's Hardware is a small building north of Pilgrim's Landing in 2277. Its only inhabitant is its sole proprietor, Haley. It has only one interior section.

Nothing is known about the shop before the bombs fell. Haley, the merchant who currently lives and works there, woke up with a case of amnesia not knowing who or where he was, but since people kept coming to buy things he decided to become a merchant, taking the shop's name and calling himself "Haley."

Like most houses in Point Lookout, Haley's Hardware is a small wooden shack with a pile of rubble next to it.

Inside on the right there is a bedroom with a bed and chest at the foot of the bed, a kitchen with some empty cabinets, and a bathroom. The part of the house where Haley does business with the people of Point Lookout has a counter and a locker holding Haley's inventory and requires a key. There is also a workbench that can be used to the left of the bathroom. A bottlecap mine on the bench can be stolen, which results in negative Karma. There is also an Average locked safe containing various loot.

Haley's Hardware appears only in the Fallout 3 add-on Point Lookout. 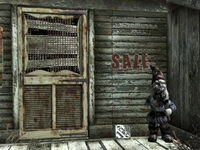 The oversized gnome and holotape note next to the shack's entrance