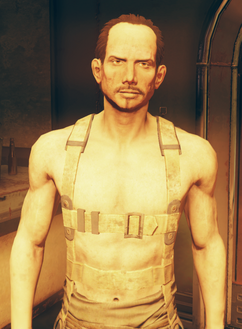 Hal Gleeson is a slave at the Watoga Civic Center in Appalachia in 2103.

The Ol' Weston Shuffle: The main objective of the quest is to free Hal from slavery, as instructed by Johnny Weston. However, after Hal is freed, Johnny reveals that the true motive for freeing Hal was so that Johnny could personally kill him, and Hal dies at the end of the quest for having previously betrayed Johnny.

Hal Gleeson appears only in Fallout 76, introduced in the Wastelanders update.

Retrieved from "https://fallout.fandom.com/wiki/Hal_Gleeson?oldid=3405139"
Community content is available under CC-BY-SA unless otherwise noted.