00000014
“Before you stands Hakunin, the village shaman. He appraises you with his crazy eyes from somewhere in the world only he inhabits...”— In-game description

Hakunin is the kind village shaman living in Arroyo in 2241. He has psychic abilities which allow him to contact the Chosen One through dreams.

His appearance is alarming, and his elocution is languid yet exquisite. He phrases everything as some sort of riddle, and will heal the player character whenever they are hurt.

Hakunin will appear in several visions when dreaming, telling about the dying village and the Enclave attack. There are four dream sequences scripted in the game code to occur on the 23rd of October 2241, 21 January 2242, 21 April 2242, and 20 July 2242. The last is also scripted to occur after leaving Vault 13; any remaining scripts are then nullified and those visions will not be seen.[Non-canon 1]

After this last dream, if the Chosen One returns again to Arroyo, the bridge map is changed, Arroyo becomes inaccessible, and Hakunin is seen in a separate talking head sequence (where he is laying on the ground with most of his tribal headgear smashed, he is covered in blood and talks in a rasping voice.), telling the Chosen One to go south, which is the general direction of Navarro. 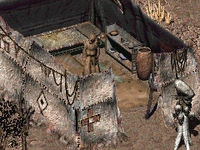