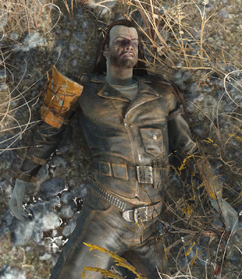 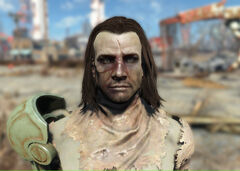 Hadrian is a deceased man whose body can be found in the Commonwealth in 2287.

Hadrian was a sniper that knew Sal and Carl Everett. He was recruited as a member of Sal's raid team by Carl via holotape found on his body, with the goal of finding the "treasure" of Jamaica Plain. At the end of the holotape, Carl encourages his participation with a split of the loot and says that Hadrian knows where to find him if interested. Interested or not, he ended up dead before he could ever make it to Jamaica Plain.

Hadrian's body is found randomly throughout the Commonwealth. Known locations are:

Hadrian's body may be found with several dead creatures around and more than once in different locations.

Hadrian appears only in Fallout 4.

Hadrian body near a trashcan, east of Sanctuary Hills

Hadrian's body, up close
Add an image to this gallery
Retrieved from "https://fallout.fandom.com/wiki/Hadrian_(Fallout_4)?oldid=3289381"
Community content is available under CC-BY-SA unless otherwise noted.