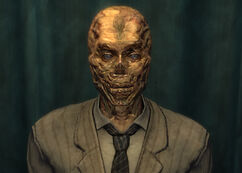 “It's great to be up here, looking down at all your smiling faces. That won't last long.”

Hadrian is a ghoul working as a stand-up comedian at the Atomic Wrangler casino in 2281.

Hadrian is a struggling stand-up comedian, whose main act is to insult people at the Atomic Wrangler casino. He is locked into working with the Garrets through a binding contract. He claims that he's "World Famous".

* Key is added to his inventory after giving Tommy Torini's business card to Hadrian in Talent Pool.

Retrieved from "https://fallout.fandom.com/wiki/Hadrian_(Fallout:_New_Vegas)?oldid=3331621"
Community content is available under CC-BY-SA unless otherwise noted.