“You might have noticed the very large building just north of here. That's HELIOS One. The NCR runs the place, so it's off-limits to prospectors.”— Old Lady Gibson

HELIOS One is a pre-War Poseidon Energy concentrated solar power plant that used to, and potentially still could, generate and provide power to the New Vegas Strip and the regional power grid. It also contains the control system for two experimental satellite weapon systems, the self-defense system Archimedes I and the offensive system Archimedes II.

Before the War[edit | edit source]

Established before the Great War as a next-generation solar power plant, hailed as the Dawn of a Golden Age, HELIOS One was more than just a renewable source of energy. It doubled as a research and development facility for the U.S. Army's top-secret orbital energy cannon, Archimedes II. Having joined the "Poseidon Family" when they began work, employees of HELIOS One were expected to keep company projects a secret, as carelessly discussing developments could pose a threat to national security if the communists got wind of Poseidon projects.[2]

The military side of affairs was handled by Brigadier General Scott Lowe, who oversaw the testing of the weapon on site.[3] Tests of the orbital weapon proved to be less than successful, as while both the orbital cannon (Archimedes II) and the array of smaller lasers dedicated to facility defense (Archimedes I) were successful, they resulted in a 2.5-minute downtime at the facility and system-frying power fluctuations in nearby installations, including Hidden Valley and Black Mountain. Further development was precluded by the destruction brought by the Great War.[4][5]

After centuries of disuse, the Brotherhood of Steel discovered the facility. The occupation of HELIOS One was a decision made by Elder Elijah who intended to unlock the secrets of the power plant. The Mojave chapter operated freely amid the Vegas wastes for several years, carrying out many reclamation missions without serious opposition.[6] In 2274, the NCR officially set up a base at McCarran International Airport. From there, the NCR set its sights on the HELIOS One solar plant. Elijah, still believing that the plant contained an unprecedented military advantage, refused to leave the plant, and forced the paladins to continue defending it. Two years of guerilla fighting against the NCR followed, culminating in Operation: Sunburst in 2276.[6]

The NCR launched the operation to capture HELIOS One. Outnumbered by NCR soldiers, a pitched battle took place. Despite the Brotherhood being in control of far superior equipment, such as energy weapons and power armor, the Brotherhood had no reinforcements and were gradually worn down by NCR's attacks. By the time the retreat signal was given by Paladin McNamara, more than half the chapter lay dead in the dust. The chapter's leader, Elder Elijah, disappeared without a trace. Brotherhood survivors retreated to Hidden Valley, while the NCR regrouped at the newly occupied HELIOS.[7] When they finally set out to locate and destroy remaining Brotherhood forces, they were nowhere to be found.[8]

As NCR soldiers explored the interior of the plant, they discovered that the Brotherhood had left them with one last nasty and spiteful goodbye in the solar collection tower before departing. The building's automated defense system had been activated, and the halls and corridors were now crawling with active and heavy-armed security robots and turrets, meaning that the getting at the innards of the building was extremely dangerous.[9] Not being willing to divert manpower and resources towards such a hazardous undertaking, and with no way of remotely shutting down the security system, the NCR command ordered the tower to be on lock-down, and had it secured in a way that required permission from two separate security terminals before it could be entered.

The NCR established a firm foothold in HELIOS One and its vicinity, although due to a stroke of bad luck, an incompetent con artist was hired to act as the facility's principal engineer. He was unable to bring the facility to even moderate operational status, leaving it stuck at 1% efficiency. Ignacio Rivas was posted by the Followers of the Apocalypse to research the facility independently and ensure that the ignoramus hired by the NCR would not figure out a way to unlock the facility's violent capabilities.

The power plant is a large pre-War industrial complex, serving as an NCR stronghold in the area. Several NCR troopers patrol the perimeter and a small detachment guards the entrance to the facility. Access to HELIOS One is gained by speaking with Lieutenant Haggerty at the main entrance or by picking the lock of a side door. Another way to enter through the front entrance is to use a Stealth Boy to sneak inside.

The lower level of the building consists of several winding hallways leading to a pool room, where a unique toolbox that spawns either a sawed-off shotgun or a 10mm pistol can be found on a nearby shelf. Traveling further into the building will lead the Courier to the plant's "technician," Fantastic, who is struggling to bring the power plant to a functioning state. The room adjacent to Fantastic's contains a scientist, Ignacio Rivas. A nearby door leads to the mirror yard.

Inside the solar collection tower are three hostile automated turrets and several level-dependent security robots. At lower levels several Protectrons and a single Mister Gutsy prototype will spawn, while at higher levels a mix of Protectrons, one robobrain, Mister Gutsies, and sentry bots will spawn. Moving forward leads to the unlocked door to a small room containing several frag mines, both active and inactive and an Easy locked terminal. The terminal can be hacked to shut off the turrets or alternatively activated to fire at all targets, including the security robots. Near the entrance is a water fountain with no radiation. Downstairs is a room with two pulse grenades on a shelf, and an Average locked safe containing more pulse grenades and pulse mines in addition to miscellaneous loot.

The hallway continues through a double-wide door and down a sloping corridor guarded by a leveled security bot. The door at the bottom leads into another narrow corridor, entering into another multi-level room with stairways and catwalks, guarded by a Mister Gutsy.

At the bottom of the catwalks, past the Mister Gutsy, is a door leading to a corridor that branches left and a shorter one to the right ending at a door. The corridor to the left contains a single Protectron in a shielded charging station. Next to the station is a laser tripwire door, disarmed with an 85 Repair or 67 Science skill. The room beyond contains four more Protectrons in shielded charging stations. The tripwire releases the shields and activates all five robots. The door to the right in the initial corridor opens into a room contains some desks, skeletons, and two Poseidon Energy employee ID cards. Both paths have doors that adjoin the final room, which contains an elevator leading to the observation level of the tower.

The observation level contains the mainframe computer used to activate the plant and direct its power, plus a broken generator that can provide power to the mainframe and a repair robot called PYTHON. There is a door at the top level that leads to the observation deck. A desk by the generator has a wooden box with embossed red symbols([!]-[X]-[H]-[A]-[H]-[X]-[@]) on it. It cannot be picked up but may be interacted with.

This is a circular deck circling the top of the solar collection tower. A spiral catwalk leads down from the entrance door. There is a reflector control panel that must be activated to complete the retargeting of the mirrors during the quest That Lucky Old Sun. 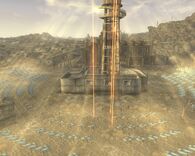 PYTHON and robobrain taking a snooze

Sneaking past the sentry bot 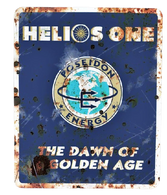 Retrieved from "https://fallout.fandom.com/wiki/HELIOS_One?oldid=3413305"
Community content is available under CC-BY-SA unless otherwise noted.
... more about "HELIOS One"
RDF feed
Has platform
Playstation 3 +, Xbox 360 +  and PC +