Fallout: New Vegas
“If you've got a mind to loot the old H&H Tools factory, don't even bother. That place is sealed tighter than a Radscorpion's bunghole.”— Crandon

The H&H Tools factory is a building located directly to the west of North Vegas Square in the Mojave Wasteland in 2281.

This large pre-War tools factory was a legacy of the House family and is still semi-functional by the time the Courier comes across it. When a freak auto gyro and lightning accident claimed both of their parents, Robert House was cheated out of his inheritance by his half-brother, Anthony House[1]. Undaunted, Robert started his own business in robotics, and as RobCo Industries prospered, Anthony slowly started losing his grip on reality.[Non-canon 1]

Anthony's deteriorating mental health manifested in increasingly bizarre and erratic security measures implemented at the factory after 2020 and 2023. Subsequent years did not help his mental state, as RobCo Industries came after H&H Tools on the trading floor, mopping the floor with its stock.[2] The situation peaked on the eve of the Great War, as the elderly Anthony (now styling himself Alexander), fired all of his employees, locked down the plant and deployed heavy security measures.

The factory consists of two floors with sporadic placements of traps and frag mines. Throughout the facility are a number of terminals with correspondence between one another; while mostly business-related, in one room the messages between each computer are humorous and sexual in nature. Part of the bottom floor contains an industrial area leading up to the top floor, containing the office of Anthony House.

The double doors to the left of the entrance lead to a hallway, where the first room to the left is a kitchen containing a variety of loot, and the door at the end, protected by frag mines, leads to a larger room protected by a rigged shotgun just past the door. Going in, a crazed Mister Handy will be encountered, with the two doors to the left being guarded by two automated turrets. The door to the right has a pressure plate steel girder trap and leads to a room flooded with radioactive liquid.

Going forward from the entrance is a large metal room guarded by two robobrains, and is flooded with irradiated water, with frag mines deployed on the metal steps leading to the a metal catwalk. The room ahead has two frag mines at the doorway, and contains a suspicious terminal that holds the journal entry 04/15/2077. The office to the left is Anthony House's office guarded by a shotgun trap tied to a tripwire directly inside the doorway. On top of his desk lies a red Lucky 38 VIP keycard, while the computer in the room provides the ability to perform an executive override for the Lucky 38 penthouse after it has been hacked into. The hallway to the right leads to some offices with a terminal holding the journal entries 04/06/2068 and 12/27/2074. 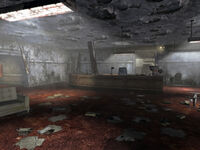 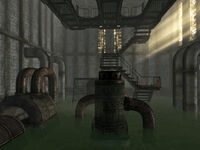