RobCo Industries
“Building the things you need to build a better tomorrow!”— Advertisement[1]

The H&H Tools Company was inherited by Anthony House following the death of his father. Anthony used his lawyers to cut his half-brother, Robert House, out of his inheritance.[2]

Under his leadership, the company initially prospered and employees enjoyed great benefits.[3] As the years went on, he found himself missing his father's presence and advice more and more, but told himself he would not be weighed down by the past, convincing himself that it wasn't really family, as the House family was broken.[2][4]

After a year, he became paranoid towards an employee named Henderson, believing that he and his brother were conspiring to seize the company, and had his human resources manager Cindy-Lou Kreb keep an eye on him.[5] As a result of his growing paranoia, he began introducing extreme security measures and employee policies.[6][7][8]

This was worsened when Robert's RobCo Industries began a hostile takeover of the company, first attacking them on the stock market.[9][10] This resulted in Anthony's mental breakdown and on the eve of the Great War, he sealed the Vegas factory, which became a deathtrap for years to come.[11]

H&H Tools Company appears in Fallout: New Vegas and its products appear in the add-on Lonesome Road, as well as Fallout 76, introduced in the Expeditions: The Pitt update.

H&H Tools Company is a reference to the real world Hughes Tool Company.

Sign in the front lobby of Michael Angelo's workshop 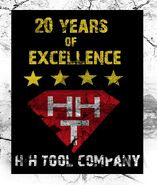