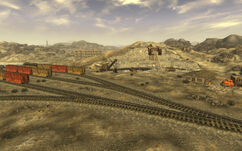 The Gypsum train yard is a location in the Mojave Wasteland in 2281. It is located northwest of the cap counterfeiting shack and west of Bitter Springs.

The outside is patrolled by many blind deathclaws and young deathclaws. The office building is occupied by three giant ants, whose bodies may or may not contain ant nectar and/or an ant egg or two. In addition, there are ten ant egg clutches, most of them containing ant meat.

The Sunset Sarsaparilla star bottle cap does not always appear. Reloading from a previous save may fix this. Alternatively tossing a frag grenade into the area of the desk (with the dead terminal) seems to shake it loose and make the bottle cap re-appear on the desk.[verified]

Dump truck next to the office.
Add a photo to this gallery
Retrieved from "https://fallout.fandom.com/wiki/Gypsum_train_yard?oldid=3461431"
Community content is available under CC-BY-SA unless otherwise noted.