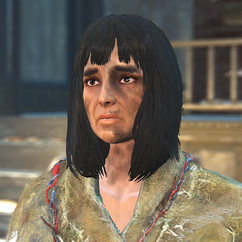 Church of the Children of Atom (formerly, optional)

“You have come to know the one real truth of this world. Nothing is the only thing that truly matters.”

Sister Gwyneth is the heretical member of the Church of the Children of Atom on the Island in 2287.

Known for her peculiarities and moods, Gwyneth is a very devout and dedicated child of Atom. She was well liked among her family, known for her reliability, and ability to find a cache of mirelurk eggs on beaches they thought were clear.[1] She would spend hours with their former high confessor, Martin, discussing the finer points of their faith.[2]

Upon seeing documents describing what an atom was, she could no longer believe that Atom was real. With Martin's zealotry lingering and losing control of his flock, she came to him to discuss her crisis of faith.[3] For the better part of two hours, they discussed their dogma, with Martin reminding her of all the gifts they believed Atom bestowed upon them, their radiation immunity, their family and their home on the Island. That eventually calmed her down, but as she left for bed, her questions lingered in his mind and raised doubts that Martin had possessed for some time. Martin would question how wise she was,[4] although this would be blamed on DiMA.[5]

Sometime later, while Gwyneth was praying quietly, she suddenly lept up and began to shout that Atom is a lie. Although not a violent person, when the then Grand Zealot Tektus confronted her, Gwyneth struck him with such force that she knocked him to the ground. When she realized what she had done, she fled. Tektus wanted to immediately send someone after her, to make her an example, but High Confessor Martin insisted they wait for her return for Atom's forgiveness. However, this did not take place, as blasphemous messages appeared at their holy sites not long after.[6][7][8][9][10] Now that the sister is committing such fervored acts of heresy, Zealot Theil was tasked by Tektus[6] to bring her Atom's justice: execution.[11][12] However, this is hampered by how clever Gwyneth is, and Theil has since been unable to track her whereabouts. Her failure to both find Gwyneth and Gwyneth's heresy eat away at her constantly, as Theil has been praying to Atom for her friend's return to the family.[13] Should Sister Gwyneth return to the family, Theil will be very grateful[14] and Richter would be impressed that the Sole Survivor got through to her and grateful. As he to is extremely fond of her,[6][15] he would even go so far to convince Tektus to show mercy so long as she remained faithful.[16]

Despite his fondness, the heresy needed to be dealt with and Richter would not bat an eye should she remain a heretic. Whatever the outcome, the Sole Survivor proves themselves worthy to enforce Atom's laws in Richter's eyes, so much so that he solemnly hands over a sacred religious weapon, "Atom's Judgement," to continue the fight against the enemies of Atom.[17][18][19][20]

When she left the children to pursue her new heresy, it was not just that Atom was completely fictional, but also that the real truth is that "nothing" is god, that "nothing" is deathless, without fear and remorse, and that those who have died have become one with nothingness.[21] Gwyneth even went as far as to believe that the Children of Atom was a false gospel by those like Martin and Tektus to know the truth about Atom, and that Atom is a tiny mote in the vastness of "Nothing," which is the true nature of existence.[22][23][24]

To spread her message to try and save her family, she began to "desecrate" the Children's holy sites with her message. She truly cares for her family and wants to save them, seeing her new mission to spread her truth of "Nothing." She wishes that she was not compelled to do so,[25][26][27] and that she could just go home to be with her family.[28][29][30]

The Sole Survivor, whether a child, crusader or most appropriately an inquisitor,[6] can convince her that she is just blinded by fear and doubt, and that she should just come home to face punishment.[31][32] However, the Sole Survivor can also more easily convince her to flee the Island[33][34] to spread her message to those whom will actually listen.[35]

Despite all that she could have learned about forgiveness in the face of heresy, she has none for Far Harbor, and if it is destroyed, she will take some mild pleasure in its destruction.[36][37]

Sister Gwyneth appears only in the Fallout 4 add-on Far Harbor.

If convinced to flee during The Heretic, she may still be found working in the Nucleus afterward. It will not be possible to interact with her and she will not respond to prompts by the Sole Survivor to talk to her. [verified]

Retrieved from "https://fallout.fandom.com/wiki/Gwyneth?oldid=3256348"
Community content is available under CC-BY-SA unless otherwise noted.