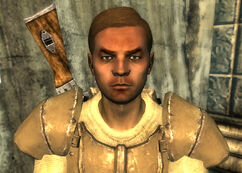 “You serious? You don't know what a Ghoul is? A goddamn disaster waiting to happen that's what they are. Sure, maybe you can get over the fact they look like someone took a cheese grater to their face. But it's what you don't see that's the problem. The radiation slowly eats away their brain, then they go zombie on you. It's better for everyone to kill them before all that, if you ask me.”

Chief Gustavo is the security chief of Tenpenny Tower in 2277.

Gustavo was born in 2235. Prior to becoming a security chief in Tenpenny Tower, Gustavo worked his way up to become the leader of a mercenary band of professional fighters. Mister Burke was rescued by Gustavo and his band, and quickly hired him and his men to form the security force at the Tower. His personality is gruff but good-natured in a, "Don't give me grief, I'm just doing my job, ma'am" kind of way. He soon develops a no-nonsense attitude when his team or his charges are in immediate danger. He is particularly hostile to ghouls. "The only good ghoul is a dead ghoul," he is fond of saying, particularly if ghouls are nearby. If it is pointed out that not all ghouls are mindless killing machines, he responds, "It's only a matter of time before they go zombie. Dead now or dead later. Why take the risk? Besides, you're doing them a favor."[1]

After the Lone Wanderer's first encounter with Gustavo, he is found sitting in the lobby of the hotel or sleeping outside during the night, most of the time he will stand guard at the entrance.

Tenpenny Tower: Gustavo will task the Wanderer with getting rid of the ghoul menace if asked.

Chief Gustavo appears only in Fallout 3.

Retrieved from "https://fallout.fandom.com/wiki/Gustavo_(Fallout_3)?oldid=3258119"
Community content is available under CC-BY-SA unless otherwise noted.