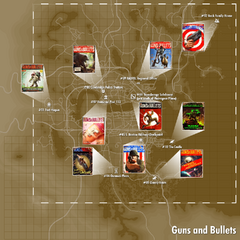 Guns and Bullets is an annual pre-War magazine that makes no apologies or excuses for what it really is. It presents itself as "a magazine devoted to the practical use of firearms, and the occasional biased review."

The Future of Hunting?

Bear Proofing Your Campsite: Don't get Caught by Surprise!

Plasma - The Weapon of Tomorrow

Clean versions from The Art of Fallout 4, with issue numbers visible