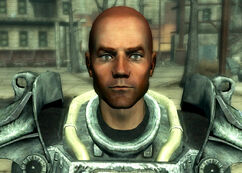 Paladin Gunny is a Brotherhood of Steel Paladin stationed at the Citadel in 2277, and is tasked as the drill instructor for new initiates.

Paladin Gunny was involved in Elder Lyons' original expedition to the Capital Wasteland. He is in charge of training initiates and turning them into hard-nosed Knights and Paladins. He is unhappy with Elder Lyons's method of taking on volunteers from the wasteland, but still performs his duty to the best of his abilities.[1]

He can be found in the A ring just outside the lab in the council room, outside in the courtyard training recruits during the daytime, or inside a dormitory in B ring.

Paladin Gunny appears only in Fallout 3.

"Gunny" is a play on the common nickname for the United States Marine Corps personnel holding the rank of Gunnery Sergeant.

Retrieved from "https://fallout.fandom.com/wiki/Gunny?oldid=3326580"
Community content is available under CC-BY-SA unless otherwise noted.