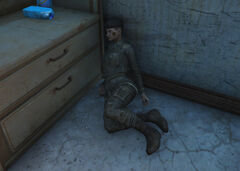 On Queen, a deceased Gunner found at the Red Rocket northeast of Big John's Salvage during Burned on the River.

Jack is such a dumb pogue. We all know he was helping Sarge hide the stash, he just betrayed him to save his own skin.

He can say he was just following orders, but the chain of command doesn't apply to piece of shit liars.

It's obvious when he's lying too. He has that same nervous twitch when he tries to bluff at poker.

I still remember when Sarge taught us the game. Every card's got a number, even the ones that don't. Ace is the same as one, Jack is eleven, and so on. Five cards make a squad, just like the five of us.

I especially like the fact that Queen's the number twelve, one more than Jack. Which makes sense, because again, fuck Jack, the guy's beneath me.

Besides, even if he was telling the truth about Sarge, it doesn't take a genius to see that loot's better split three ways than four.