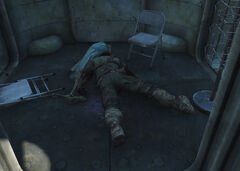 On Jack, a deceased Gunner found at the South Boston military checkpoint during Burned on the River.

At first I refused to believe it. Sarge had been acting weird, sure, but everyone has their days when you're living in the shit.

The five us of started out in the same squad. Semper Fi, band of brothers, all that shit and more. In a word, we were inseparable.

But after I saw what he wrote, there was no defending him. Sarge has been hoarding stuff for himself, and whatever it is, it must be big. So big he couldn't say what.

Of course, now he can't say much of anything, seeing as Queen slit his throat.

Because of that, all we have to go on are these clues he left for himself. Still, at least we're all working together to find it. Greed tends to be contagious, but so far none of us are showing the effects.

Ace said he gave Sarge a traitor's burial, some place where the ferals are sure to find him. He also said Deuce and Queen want to meet in the abandoned trailer off the road.

Good idea. Best to keep this between the four of us.