You Can Depend on Me
Dealing with Contreras

Fallout: New Vegas
“This is the New Vegas branch of the Gun Runners, supplying the wasteland with only the finest armaments since 2155.”— Vendortron

Gun Runners is a location in the Mojave Wasteland in 2281. It is located just south of Freeside and is run by a company of the same name. The Gun Runners specialize in the manufacture and sale of firearms.

This small factory compound is a branch of the powerful Gun Runners merchant house. In contrast to the nearby Crimson Caravan company, the Gun Runners operate in a decentralized fashion (such as with Isaac being the contact for the supply end of the operation).[1][Non-game 1]

The location consists of a building enclosed by a fence. A small kiosk is situated in front of the fence and serves as the shop while the larger building houses the manufacturing arm of the company. Vendortron, a robot merchant, is stationed in the kiosk to process transactions.

A Gun Runners employee named Isaac stands outside the compound. A reloading bench is set up next to the kiosk.

Inside the fence, two guards patrol the area in a clockwise fashion. They linger on the platform in the northeast corner of the fenced-in area for a short time and then continue their patrol. Entering the fenced-in area or the building is considered trespassing, and will cause the guards (excluding Vendortron) to turn hostile.

After the player finishes Honest Hearts, the Gun Runners will start selling .45 Auto pistols and .45 Auto submachine guns, along with .45 Auto rounds and will always stock all of the weapon mods for the Honest Hearts weapons. If Gun Runners Arsenal is installed, the Vendortron will offer unique items that would appear in merchant inventories if said merchants are dead.

There is a Companion dismissal terminal on the outside wall of the box where the Vendortron is located, after patch 1.4.0.525.

The Gun Runners' building is a single-story warehouse that consists of the main lobby and several smaller rooms. Directly in front of the entrance is a workshop on the opposite side of the lobby. Within the workshop is a computer terminal containing the manufacturing specifications, which will be needed by the Crimson Caravan's Alice McLafferty for the quest You Can Depend on Me. A living quarters section of the building is located to the left upon entering the lobby. This portion of the factory is made up of a kitchen, bathroom, and bedroom.

Within the building is a single Gun Runner guard and three gunsmiths. The guard remains stationary in the kitchen in combat armor, armed with a hunting rifle. Should the Courier enter the building during the day, they will move from the kitchen to the workshop. They will be sleeping at night. The guard and gunsmiths attack on sight but items found in the building are not owned and thus can be taken without any Karma penalty. In addition, killing anyone on the premises does not give negative Karma or affect reputation with any faction. Vendortron will continue to do business with the Courier despite any interactions with surrounding Gun Runners employees. However, the robot will temporarily refuse to serve the player character during combat.

Weapons purchased at Gun Runners are at 98 percent condition. After the Courier finishes Honest Hearts, the Gun Runners will start selling .45 Auto pistols, .45 Auto submachine guns, war clubs, and fire bombs along with .45 Auto rounds, and will always stock all of the weapon mods for the Honest Hearts weapons. Vendortron's inventory changes on Wednesdays and Sundays.

This Gun Runners location appears only in Fallout: New Vegas.

The Gun Runners is located in the same relative geographic location as the Historic Commercial Center just north of the Las Vegas Country Club—the relative geographic real world location of the NCR sharecroppers. (The Gun Store Las Vegas, which is a store that sells a wide variety of pistols, rifles, and shotguns, while allowing others to use in store weapons at their on site practice ranges, is a likely location inspiration as well. However, it's actually located directly east of McCarran airport on Tropicana rather than north of the airport as in-game.) 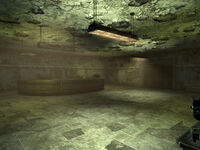 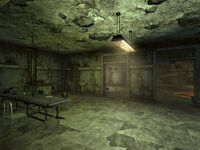 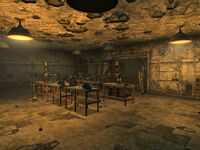 Alternate view of the workshop