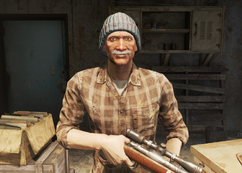 Gun Run is a miscellaneous quest in Fallout 4.

As one approaches the Rook family house in Salem, they will see Barney Rook standing on the roof of his house, which is surrounded by mirelurks. The mirelurks are initially friendly but will turn hostile when approaching the house, starting the quest. After they are defeated, get closer and Barney Rook will speak to the Sole Survivor and invite them to enter the bunker in the basement of his house.

Upon arrival, Barney will speak to the player character, continuing the quest. He will say that the Salem Militia, composed of himself and his rifle, Reba, need some help to reactivate the defenses of the town. He will ask the Sole Survivor to activate the terminals controlling the turrets throughout the town. To do so, one must enter Barney's password in the terminals. As warned, one will find mirelurks along the way.

Once all five terminals have been activated, return to Barney and he will give the player a character a reward: Barney's key, which allows access to Reba II, a special sniper rifle with +50% bonus damage against bugs and mirelurks.

Retrieved from "https://fallout.fandom.com/wiki/Gun_Run?oldid=3416956"
Community content is available under CC-BY-SA unless otherwise noted.
... more about "Gun Run"
RDF feed
Has platform
PC +  and Playstation 4 +