Can be discarded to obtain a weapon 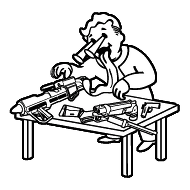 “You are obsessed with using and maintaining a wide variety of conventional firearms. With each rank of the Gun Nut perk, you gain an additional 5 points to the Small Guns and Repair skills.”— In-game description
“The Gun Nut perk grants acess to more effective gun mods.”— VDSG Catalogue No.9270.

Gun Nut is a perk in Fallout 3, Fallout 4, and Fallout: The Board Game.

Each of the three ranks of this perk permanently increases the player character's Repair and Small Guns skills by five points.

In Fallout 4, Gun Nut returns as a feature to enhance projectile weapon modifications, and it also enables the player character to build turrets in their settlements.

While at a settlement, the player character can discard this perk to obtain a single weapon from the shop or any discard piles.

Loading screen slide
Add a photo to this gallery
Retrieved from "https://fallout.fandom.com/wiki/Gun_Nut?oldid=3481804"
Community content is available under CC-BY-SA unless otherwise noted.