Increases damage to each subsequent target 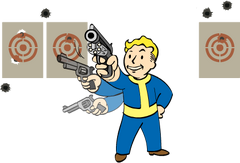 This perk causes each shot on targets after the initial target to do additional damage, but only applies to a new target in V.A.T.S. Additional shots at the first target do not count towards the chain. At rank 3, every target from the fourth and beyond will be an automatic critical hit. The effect only applies to additional targets, not additional limbs within the same target, and queueing actions "back and forth" across two or more targets does not trigger the effect on the first target.

V.A.T.S. allows only 16 actions to be queued, potentially allowing for 13 critical hits to be delivered. These critical hits do not count towards refilling the critical meter, however.

Settlement turrets and grenades/mines (enemy or player character thrown) count towards targets in the chain.

This perk stacks very well with the Better Criticals perk, as well as the Penetrator perk.

While the additional damage of a critical hit is typically inconsequential by the time Rank 3 of the perk can be taken, the more important aspect of the perk is that (other than when using a weapon with the Two Shot modification) a critical shot always hits, regardless of how low the percentage shown in V.A.T.S. is, and this applies to criticals caused by this perk as well.

The name of the perk is a pun on the fighting style Kung fu. Gun fu, also known as gun kata, is a real-world concept for a formalized set of choreographed movements based on martial arts and optimized for close quarters gun fighting. The style was popularized in some Hong Kong and American films, particularly near-future dystopian movies like Equilibrium.

Retrieved from "https://fallout.fandom.com/wiki/Gun_Fu?oldid=3428751"
Community content is available under CC-BY-SA unless otherwise noted.