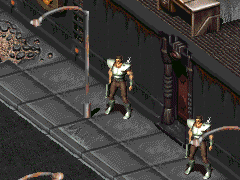 “Who cares about shock value? We ain't artists, we're professionals. Uh, Leone, someone's trying to talk to us. Aren't we supposed to kill them if they do that?”

Guido is one of two guards that stand in front of the Friendly Lending Company in the Hub. The other guard is Leone, and their boss is Lorenzo Giovanni.

Guido is working for Lorenzo Giovanni, an employee of Mr. Decker. Guido rarely talks, and just wants to protect his employer.

Guido can be talked to, but for no information. For some real interaction, one will have to kill his employer, Lorenzo Giovanni.

Guido appears only in Fallout.

Retrieved from "https://fallout.fandom.com/wiki/Guido?oldid=3211853"
Community content is available under CC-BY-SA unless otherwise noted.